Regrets live in our mind as burdensome reminders of perceived failure, manifesting as self-judgement, which may result in ill-health and troubled relationships.

Memory, a mysterious aspect of our being, allows us to savor positive past experiences. The vacation, a delicious meal, the first kiss with a beloved. Memory also serves to torment us with the discomfort of other choices. An impulse purchase, a lie, an episode of unfaithfulness, misplaced anger, violent action. On and on and on.

Those who have experience with 12-Step Programs are familiar with examining regrets and making reparations. In a similar vein, Jewish tradition teaches that when you have knowingly done a wrong to another person, healing comes by directly (if possible) spelling out the wrong you have done, asking for pardon and offering appropriate reparations. If the other refuses to accept your apology, try another time. If refused again, make one more attempt. If refused again, it is considered that you have done your best, and your conscience (karma, to mix religious metaphors) is cleared. If the individual harmed is no longer living or available, find a way to make an appropriate reparation by helping someone else.

In addition to regrets over actions done, we regret that which was undone, such as missed opportunities. My clients have expressed regret over not being more adventurous, not taking more chances, dithering over a decision until it was too late, staying in a life-sapping situation rather than summoning the courage to leave, not taking better care of their health, or not finding ways to deal with problems and stress.

Healing regrets over that which was left undone may take the form of asking for pardon, if the past choice had a harmful impact on another. “Undone” regrets may be healed by simply doing what needs to be done, such as tending to one’s health, or by doing what might be regretted if an opportunity slips by.

In same way that other forms of negative energy are addressed, become aware of your regrets through examination of thoughts, dreams, and reactions. What a burden regrets are! Journal the regrets, examine their origin, and contemplate their healing, whether they center on things done or left undone..

And, as always, ask for help if needed.

As to the question implied in the title, the obvious answer is “nothing.” What could be strange, odd, or amusing about these virtues?

This is the name of a marvelous song, written by Nick Lowe in 1974, and memorably recorded by Elvis Costello in 1979.The lyrics include these lines: As I walk through this wicked world, searching for light in the darkness of insanity, I ask myself, Is all hope lost? Is there only pain and hatred and misery?'”

These lyrics could meaningfully have been penned today. Or yesterday. Or January 6th, 2021.

In our deeply divided country, we are each faced with options of how we react to troubling events, and the people who perpetrate them, as well as those who tacitly or openly condone violence and hatred.

I deeply believe in the power of peace, and the power of love. And most days, even with those of a radically different perspective, I can stay in a good place. But understanding? That’s not happening. How can we understand that which is irrational?

Theologian Ted Peters wrote a book entitled, “Sin: Radical Evil in Soul and Society.” In it he makes the case that evil is inherently irrational. No amount of rational argument, no evidence, or statistics will touch the actions and arguments of those bent on destruction.

The best we can do is remember this important teaching and not waste our time in disputation. Focusing on peace and love in our own souls will spill out, and slowly but surely move people and events in a more positive direction.

Please find a video of “What’s so Funny “bout Peace. Love, and Understanding” on YouTube. It’s best played LOUD, and I promise it will make your day.

(NOTE: Apologies. I valiantly tried, and failed to include an actual link to the song.) 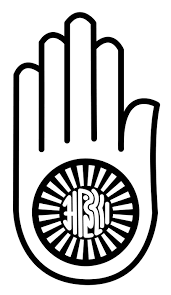 My personal discovery of Jainism came while teaching world religions at Oakton College in suburban Chicago. This non-theistic (no “god” per se) religion arose in India around 500 BCE, based on the insights of the spiritual teacher Mahavira. While I am not a Jain, the teachings have a positive impact on my life.

The symbol shown above presents the main tenets of Jainism. The word in the center, ahimsa, literally means “stop”, referring to cycles of reincarnation as represented by the  wheel. The answer to how this cycle of birth and death may be stopped or transcended comes in the practice of ahimsa, which can provide the basis for a renewal of the world, through the healing of a single life.

The Jain teaching of ahimsa asserts that by doing no harm to any living thing, we heal ourselves and create healing energy that moves beyond us.  We are counseled to also avoid angry thoughts and actions. According to Gandhi, a Hindu who valued Jain teachings, ahimsa additionally precludes evil thoughts and hatred, and unkind behavior such as harsh words, dishonesty, and lying, all of which he saw as manifestations of violence.

No violence, no harm, no unkindness. What a world we could create while seeking to renew and free ourselves!

A few years ago I was invited to teach a series of classes on religious traditions at a synagogue in suburban Minneapolis. For those unable to attend, a friend recorded a video of each session and posted them to YouTube. Amazingly, the video on Jainism has received more than 15,000 views.

I am more intrigued by commonalities than by differences. Walk around a neighborhood anywhere in the world and you will see green plants, intentional and unintentional. Some plants arrive wind or animal-borne. These we often call weeds, but what is a weed besides a perception of desirability? Other plants we intentionally introduce to our yards and homes as sources of beauty or nutrition.

Yesterday my mom and I visited Bergeson’s Nursery in rural Norman County, Minnesota, where we always purchase our plants. Now an urbanite, each spring I make a pilgrimage to Bergeson’s. They sell vibrant stock and offer free homemade donuts of  the highest quality. Both body and soul receive a  treat.

A home without intentional outdoor greenery causes me to imagine trouble indoors. Can one equate enjoyment of plants with health? You may say that there are people who are physically unable to garden. Fair enough. On a walk this afternoon, an unscientific survey of 60 nearby homes showed that 90% have outdoor plantings.

The pleasure I take in gardening feels deep and old. I remember being out in the vegetable garden with my step-grandpa. I tasted my first radish and the burning taste made me cry.  I remember the lush pink peonies grown by one grandma, and the fragrant sweet peas grown by the other. I remember my mom and dad planting a vegetable garden in the spring and each year adding new plants to the backyard flower garden. Both of my grown children enjoy gardening, and my 2-1/2 year old granddaughter has her own set of garden tools and pair of gardening gloves.

There can also be great pleasure found in observing the plants which happen to grow in a patch of bare soil. Leave a corner of your garden unplanted and “unweeded”. Over the course of a season see what appears. Explore an empty lot and note the variety of life inhabiting the space. Or go rogue! Plow up your lawn and let it grow wild. Your neighbors may come after you with hoes and pitchforks, but you will doing doing a favor to creatures of many sorts.

People can be bound together by hatred or love, by ugliness or beauty, by death or life. In an increasingly dark world, let’s acknowledge and celebrate the universal  healing power of plants.

Go forth and grow!